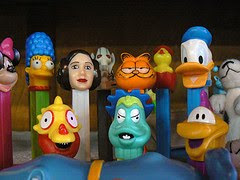 I’m what you might call a second-generation marketer. My father started his professional marketing career with Data Terminal Systems back in 1974 — a full decade before I was even born. As such he has certain sensibilities about the theory and profession of marketing. You might call him old-school. (I say this fully conscious of the irony of having linked to his LinkedIn profile at the beginning of this paragraph.)
For example, my father still professes that there is value in buying booths at trade shows, despite (or perhaps in spite of) people telling him that it’s a dying practice. So I asked him why. He told me he keeps buying booths because of Pez.
“Pez?” I asked.
“Pez,” he said. Then, as is characteristic of men of a certain age, he launched into a story.
He told me that during every conference, he stocks an enormous number of Pez dispensers at his booth. His company buys them by the gross. All kinds: big ones, little ones, ones shaped like cartoon characters, ones with sports team logos… a smorgasbord of Pez. And at conferences, he stands in front of his booth and asks passers-by if they’ve gotten their Pez yet.
“Well no, I haven’t,” they say. “But what does Pez have to do with your product?”
“Absolutely nothing,” my father says, “apart from the fact that after I gave you this Pez, you asked about my product. Would you like to learn more about it?”
Bam. Just like that.
Why does Pez work?

What does this have to do with video?
My dad might not agree that it is possible to recreate the Pez experience online, but I think it is. The problem in doing so is constructing a platform where you can have a direct dialogue with the person you’re trying to reach. There are lots of ways to do this — email is one, blogs another, social media a third, each with its own intrisic benefits and detriments.
But in order to inspire this dialogue, you need something that is small, unexpected, universally good, and frictionless. (I wish those four words made a cool acronym; SUUGF just doesn’t do it for me.) And what better way to create this trigger than with video? Take a short, relaxed, thirty-second video about your company’s new product in your email newsletter, for example:

In the end, my father’s way of marketing and mine aren’t all that different. You need to stand out to engage with people, and the process of engagement needs to be fluid and natural — or if not natural, at least entertaining. I won’t be buying real estate at trade shows anytime soon, and I’m sure dear old dad won’t be telling people not to buy his product online, but at least we can see the value in the other’s proposition.

Pez continues to be a cultural phenomenon to this day. In addition to candy, Pez also offers a collectible experience for it’s thousands of fans around the world. Check out http://thecollectionary.com/club/pez for a facinating look at Pez over the years. The Collectionary is a growing community of collectors and enthusiasts who are building an encyclopedia of everything that people collect.